How to use Web Audio API

Web Audio API is an interface for generating and managing audio directly in the browser using JavaScript. This June, The World Wide Web Consortium (W3C) informed that Web Audio API is now an official standard.

We used this interface when working on the Virtual Y project based on Drupal. It was a video-call application for personal training. We needed to develop a sound indication widget that could detect the caller and his interlocutor's sound state, for example, if the microphone is muted, and visualize the volume level changes. We enjoyed using the Web Audio API, and in this article, we're explaining how the API works and describing some of the features it provides.

What was Before the Web Audio API?

Historically, building an audio application was quite a challenging task. There were different possibilities for developers when they wanted to work with sounds in a browser. One of them was the now deprecated Background Sound element <bgsound>. It was meant to make a sound file play in the background while a user was interacting with the page.

Another tool for working with audio was Adobe Flash, a platform for developing and displaying various multimedia and interactive content. Adobe stopped supporting Flash Play at the end of 2020.

In 2014, HTML5 became a standard language of the web and offered the <audio> tag for embedding sound content, among other features. It is supported by most browsers and provides basic features, such as play, pause, fast forward, or volume adjustment. This tool was more usable but still not ideal. The Web Audio API evolves audio handling processes even further. While the Web Audio API predecessors aimed to simply enable playing the recorded audio, this interface concentrated on sound creation and modification and allowed different audio operations.

Web Audio API is a way of generating audio or processing it in the web browser using JavaScript.

The Web Audio API provides options for handling audio operations inside an audio context. It allows modular routing. Basic audio operations are performed with audio nodes. They are connected via their inputs and outputs. They form a chain that starts with one or more sources, goes through one or more nodes, then ends up at a destination.

What tasks can be performed with the Web Audio API?

Here are a couple of examples:

How can it be done? Let's go through the usual development stages.

The common process of working with the Web API may look as follows:

2. Inside the context, create sources to provide audio samples. An audio file, stream or oscillator can act as such sources.

4. Choose the final destination of audio. It can be system speakers, headphones, or other output devices.

5. Establish connections: the sources should be connected to the effects, and the effects to the destination. 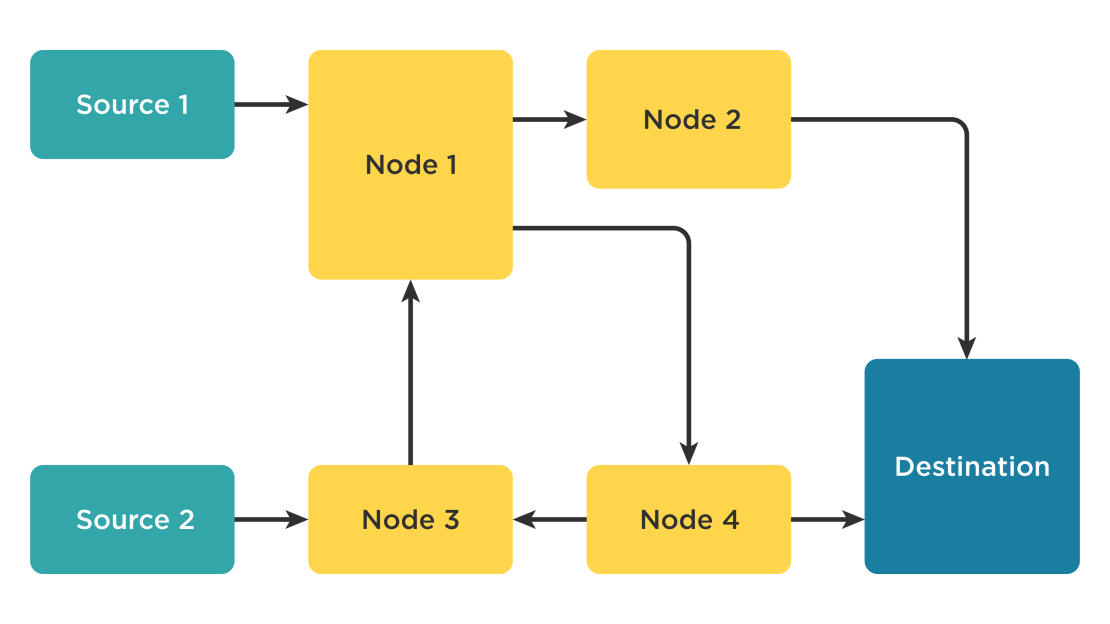 Web Audio API provides various practical features. Here are some of them.

When we worked on the "one on one" calls feature for the Virtual Y, we faced the following problem. The interlocutors' video and audio state indications should be showing if the device's mics on both sides are working and transferring the audio stream. It's needed to identify the weak spots in the sound transmission process. First, we implemented a simple "disabled" indication that showed if the audio or video was manually enabled or disabled on the caller side. But such a solution was not good enough to analyze if the problem was with the caller mic or with your headphones, for example.

So the next step was to use the features of the Web Audio API in the stream analysis on the fly and measure the average volume in each frequency range and change the audio indicator size based on this data. After that, it was easy to understand if the mic on your side worked properly.

Have a look at this example. The green audio indicator increases when the clap sound is loud and becomes smaller when it's quiet.

Web Audio API was a groundbreaking solution for creating, processing and modifying audio content in web applications. Now it's also an official standard recommended by W3C. In this post, we showed how to work with this API and reviewed its key features.

Vlad
Front-end developer with 15 years of experience. Vladyslav is experienced with Drupal development, and he cultivates his front-end skills experimenting with Vue.Js, Angular and other popular frameworks.

Post-deployment support ensures that the new website delivers the system and business performances as planned.

Five Jars digital agency’s project YMCA of the North has been ranked as one of the best website designs by DesignRush. Independent analytics have decided that we build the most reliable and functional...