Drupal 7 was released in 2011 and will retire next year, while Drupal 8 has been out since 2015, and its end-of-life date is planned for November 2021. How come a later version of Drupal will be retired earlier? And what about Drupal 9 and 10? Let's figure it out together in this blog post.

TL;DR: do you prefer videos instead of articles? Feel free to watch our analysis:

Drupal 7 was released on January 5, 2011. It's been more than ten years, so it's time for this version's retirement. But no worries! If you have a Drupal 7 website, you still have time to upgrade.

Initially, the EOL was scheduled for November 2021. But, according to the Drupal 7 EOL timeline, it was extended until November 28, 2022, because of the dramatic effect the Covid-19 pandemic had on companies' budgets. Basically, contributors gave businesses one extra year for migration to Drupal 9.

If you need to upgrade your site to Drupal 9, check out our instructions with a detailed explanation.

But what are the technical reasons for Drupal 7 retirement anyway?

Well, it's simply because Drupal 7 depends on PHP 7.4, and it will retire on the same day as security support for PHP 7.4 will be finished.

Drupal 8 was released on November 19, 2015. It was a huge leap for a Drupal community because Symfony PHP frameworks were introduced as a foundation of Drupal. However, it's time for Drupal 8 to retire as well, and it's going to happen on November 2, 2021.

The reason for this is Symfony 3's end of life that is scheduled for November 2. Symfony 3 is a PHP framework Drupal 8 depends on.

You don’t need to worry that your website will no longer be supported. Drupal 9 is not a reinvention of Drupal but was built in Drupal 8 through updated dependencies and deprecating APIs. So you can easily upgrade to Drupal 9. For further detail, please have a look at our instruction.

They decided not to extend the Drupal 8 EOL because it's much less complicated to upgrade from this version to Drupal 9. As a result, Drupal 8 retires one year earlier than Drupal 7.

Drupal 9 was released on June 3, 2020, and its end of life date is already announced. According to the official documentation, the EOL for Drupal 9 is in November 2023, when Symfony 4 reaches its end of life due to the dependence of Drupal 9 on Symfony 4.

Also read:
Introduction to the Migrate API in Drupal 8/9

A new version will have Symfony 5 or 6 under the hood and PHP 8 required to secure the system. Among the Drupal 10 features are new admin themes, improvements for Layout Builder, better decoupled developer and site builder experiences, and more.

So that's how the planned end-of-life timeline for Drupal 7, 8 and 9 looks like. 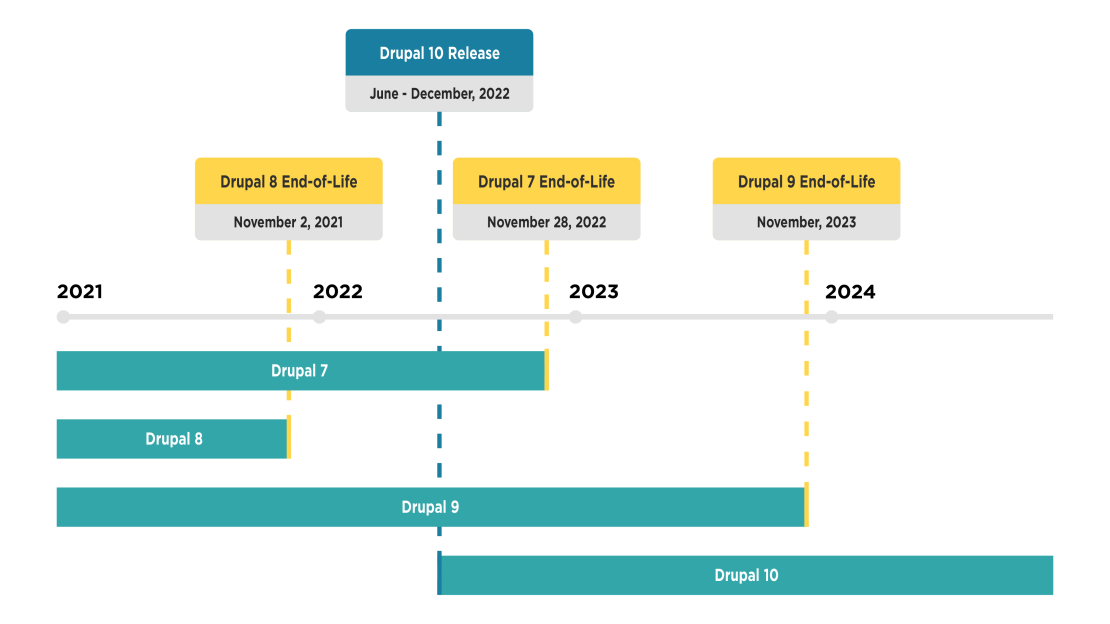 If you still haven't upgraded your site to Drupal 9, we recommend doing it now. If you need any assistance with it, get in touch with our team!