How to plan and perform upgrade to Drupal 9? | Five Jars Skip to main content

How to plan and perform upgrade to Drupal 9?

Drupal 9 has been released on June 3rd of 2020, and it is a significant milestone for the developers and users. The Drupal community has been working hard on Drupal 9 for almost five years.

What are the new features in Drupal 9?

Drupal 9.0.0 has been released altogether with Drupal 8.9.0. The release of Drupal 8.9 is a long-term support release, and it will be supported until November 2021, without new feature development (Drupal 9 development and support will continue beyond named date).

Drupal 8.9.0 has most of the changes that Drupal 9 does but retains backward compatibility layers added through Drupal 8's release. It is recommended to update your website to Drupal 8.9 if you have an existing Drupal site. It allows us to have the smallest necessary changes for the Drupal 9 update and ensure maximum compatibility.

How to upgrade Drupal 8 to Drupal 9?

Unlike previous new major Drupal versions, Drupal 9 is not a reinvention of Drupal. It was built in Drupal 8 through updated dependencies and deprecating APIs. Recently released Drupal 9.0.0 is the same as Drupal 8.9, the last Drupal 8 minor release, other than these two changes. You can learn more about the upgrade from Drupal 8 to Drupal 9 on drupal.org.

How much time do I have to upgrade the Drupal website?

Drupal 7 and Drupal 8 will reach their end-of-life in November of 2021, and there's still time to use your Drupal 7 website as it remains secure for more than one year.

If you have Drupal 7 website, you need to upgrade to Drupal 9 throughout the rest of 2020 or in Q1 - Q2 of 2021. Since the upgrade from Drupal 6/7 is more complicated, you have to make sure you have a budget and team's capacity to perform the update.

If you have the Drupal 8 website, you need to plan the upgrade to Drupal 9 as an ongoing maintenance task and perform as soon as you're comfortable throughout 2020. 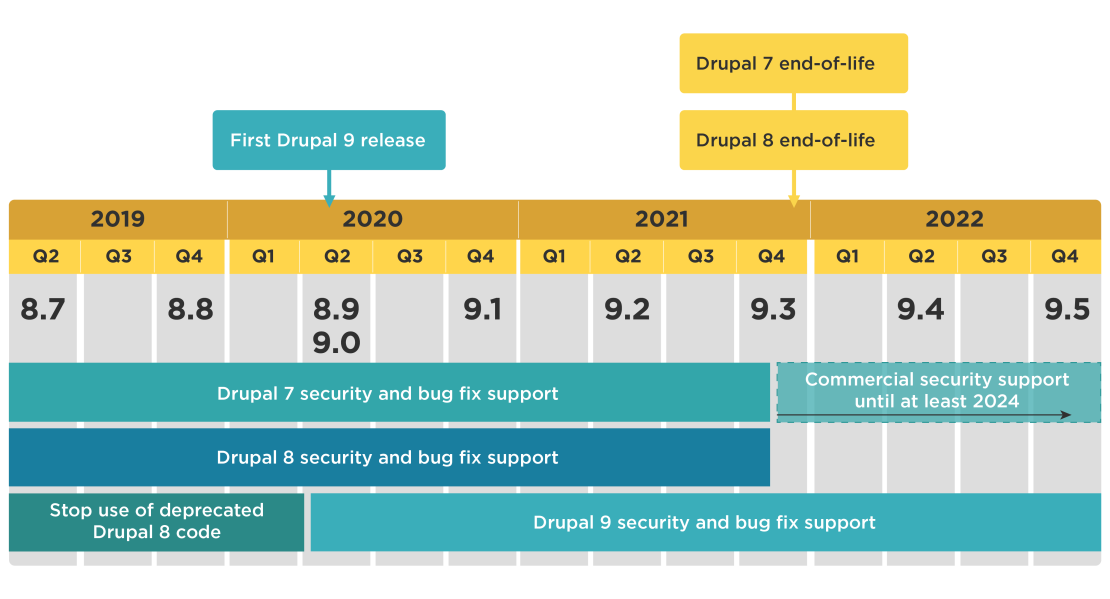 Drupal team has published dozens of great resources that will allow you to find answers to frequently asked questions about Drupal 9 or learn more about migration security and other essential aspects of Drupal 9.

If you need assistance with migration from Drupal 6/7/8 to Drupal 9, reach out to our team as we have vast experience in that.

Drupal 7 was released in 2011 and will retire next year, while Drupal 8 has been out since 2015, and its end-of-life date is planned for November 2021. How come a later version of Drupal will be...

Testing a website before launching it is a critical thing to do. This article is an overview of some actions you might want to take when launching a Drupal website. Read about the essential things to...

All You Need to Know about a FullCalendar View Module

Working on one of the FiveJars projects, we bumped into the need to create an event calendar. We wanted it to be lightweight yet powerful enough to support all the required features. After research...