Five Jars team warmly welcomed the Dries' DrupalCon 2022 presentation filled with amazing plans for the future. For those who, for various reasons, could not attend, we have compiled a briefing of the speech.

We were very proud to see the message from our CEO Alex in collaboration with many other amazing Drupal developers on the big screen in Portland! Being present at industry events after a long break once again allows us to feel the power of the Drupal community.

The position of The Drupal Association regarding the invasion of Ukraine 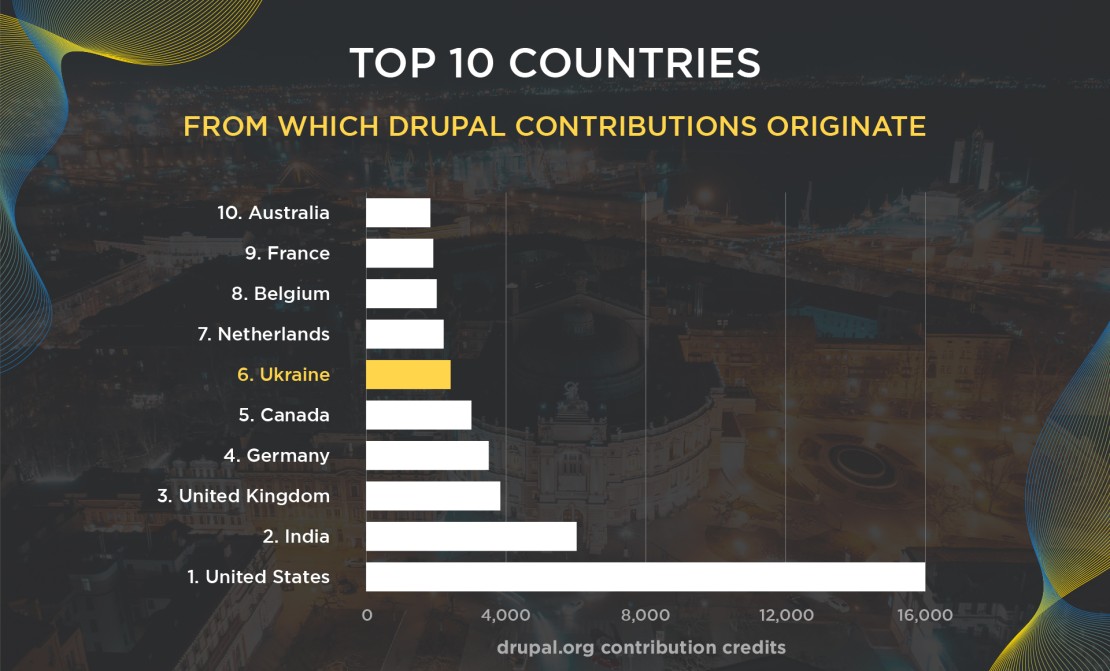 The Drupal Association supports the Ukrainians and condemns the Russian attack. Ukraine is the sixth most active country contributing to the Drupal community and the Ukrainian community is really important.

The most important thing about Drupal 10

The Drupal 10 release has been moved from June 2022 to December 2022 as there is still some work to do with the upgrade of CK Editor 4 to CK Editor 5. It's worth it, the new interface is amazing and there are a lot of plugins and integrations that will give it superpowers. This includes a WYSIWYG editor, image upload via drag and drop, and so on. Drupal 10 will also update Symphony 4 to Symphony 6.2. The minimum requirement for PHP will be increased to 8.1 as Symphony 6.2 requires it. So it's time for a code update and we can get started today! Also, before the release of Drupal 10, Drupal 9.4 in June and Drupal 9.5 in December are planned, which will be almost identical to Drupal 10 except for backwards compatibility levels. Drupal 9 end-of-life in November 2023. The community will have almost a year for all updates, which is convenient enough. This will be the easiest update in the history of Drupal: 93% of deprecated APIs have automatic fixes, and by the release date of Drupal 10, this number should increase even more. 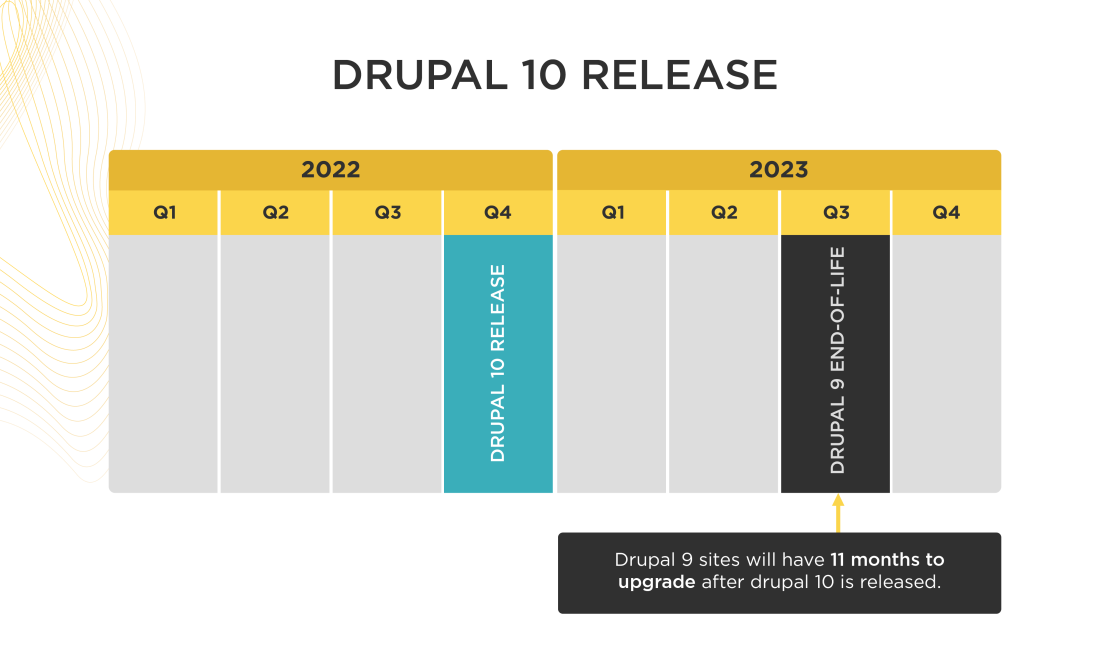 Olivero, Drupal’s new front-end theme is now stable. This is planned to be the default, so Olivero will be responsible for the first impression of Drupal. Also, the new Drupal Claro backend theme is stable and already a new default one (thanks to Lullabots). On the way to a stable version, but still, in Alpha, there are Starter Kits that will make it easier to create new themes in the future.

Auto-updates have been the number one feature request, so automatic but secure core and module updates are really popular. It's still a work in progress, but the progress is really impressive. This is planned for one of the first minor releases of Drupal 10.

Also read:
All You Need to Know about the Drupal 7 and 8 End-of-Life 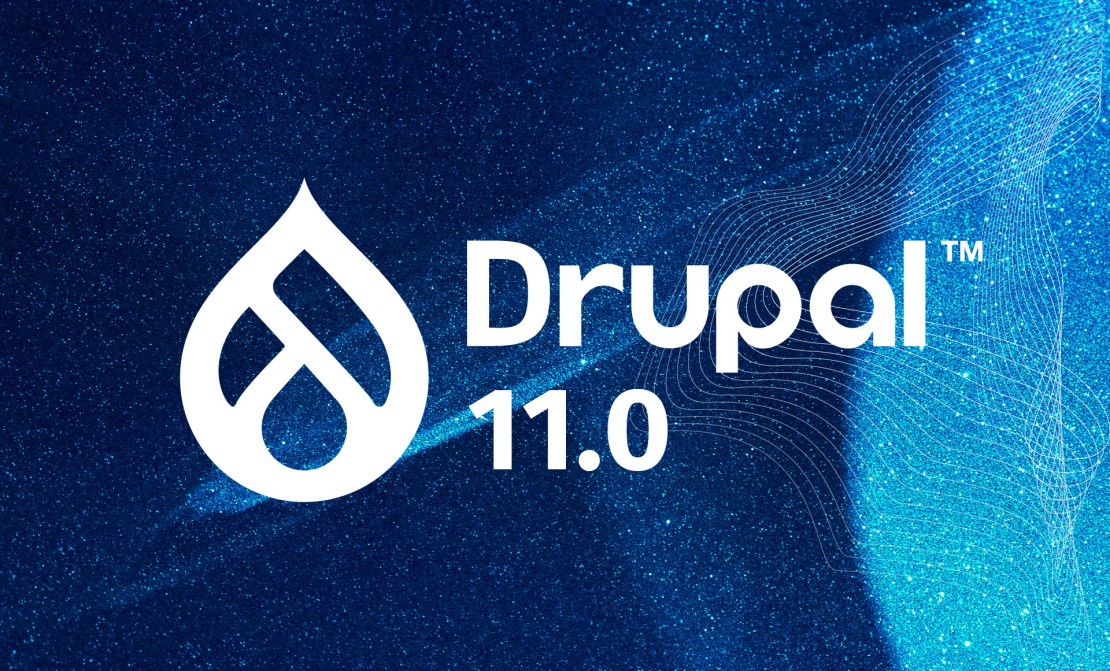 Every 30 sites on the Internet are based on Drupal, which means that we are contributing to the future. Drupal has now reached its goal of being the best tool for ambitious digital opportunities, so it's time to go back to the roots and think about Ambitious Website Builders, which will be something between a Developer and Content Author. Drupal is great for this, as it allows you to both work through the UI and writes code if you wish. The goal of the community is to make the web accessible to everyone! Drupal supports several strategic initiatives to lower the barrier to entry, such as the Project Browser for easy module discovery and Starter Templates for an easy start.

Now the main issue is making the core smaller. What core features should always be there, and which ones can be taken out of the kernel? Four main ones have been identified:

The team reviewed all the modules in the core and asked themselves - do they match one of the four main features? How many sites are used? Is it a strategic module? Is it straightforward to maintain? Based on this estimate, about 20% of the modules will be removed from the core. Two strategic themes for the next two years are empowering site builders and accelerating innovation by empowering contributors.

Do you prefer videos instead of articles? Feel free to watch the recording of Dries' speech:

Anastasia
IT marketing specialist with 6+ years of experience. She is passionate about new technologies combined with the humanities and in her free time studies HTML & CSS. Anastasia is delighted with the Drupal community and enjoys watching the popularization of open source.

Five Jars digital agency’s project YMCA of the North has been ranked as one of the best website designs by DesignRush. Independent analytics have decided that we build the most reliable and functional...

Five Jars digital agency has been ranked as one of the top 30 New York Web Developers by DesignRush. Independent analytics have decided that we build the most reliable and functional websites.

It’s the Y’s premier leadership development conference created to connect, educate, and inspire YMCA staff and volunteers. For Five Jars and the whole Open Y community it was a chance to tell about...